Meaning of “What’s Going On” by Marvin Gaye

Absolutely saddened by the shocking things he was witnessing at the protest, Benson said he asked himself a number of questions, one of which was “What’s happening here?”

After the completion of the song, Benson approached the members of his group (the Four Tops) and discussed recording the song with them, but they told him they were not interested in recording it because it was a “protest song”. Benson tried defending the song by telling the other members of the group that it wasn’t a protest song but rather one that was about “love and understanding” and that he wasn’t trying to protest but just wanted to know “what’s going on”.

After the Four Tops refused recording the song, Benson gave it to singer Marvin Gaye, who went to modify the song in the following two major ways:

Since the song was untitled when it was given to Gaye, he also gave it the title, “What’s Going On”. While Gaye was working on the song, he was inspired by the numerous social problems that were then going on in the United States. One such social ills was the Watts riots of 1965, which took place in Los Angeles and left as many as 34 people dead and 1,032 others injured. In addition to that, Gaye was inspired to write the lyrics of the song by conversations he had with his brother Frankie Gaye regarding Frankie’s tenure in the Vietnam War as well as the tragic death of his cousin in that same war.

According to Gaye, he just couldn’t go on singing love songs when the world was exploding around him. 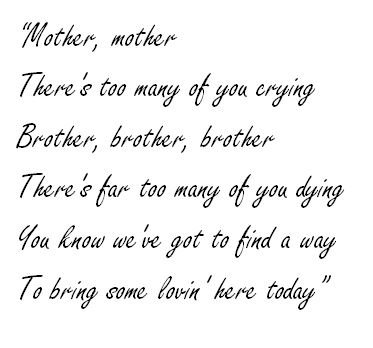 Facts about “What’s Going On”

Did “What’s Going On” win a Grammy Award?

Till date, the song is yet to be the recipient of a Grammy. However, in 1972, it was nominated for a Grammy Award for Best Arrangement Accompanying Vocalist but lost to “Uncle Albert/Admiral Halsey” by Paul & Linda McCartney.

Which singers have covered “What’s Going On”?

Since “What’s Going On” came out in the early 1970s, it has been covered by the following musicians:

Below is Cyndi Lauper’s official music video for “What’s Going On”: