Don’t Come Around Here No More is a song performed by the American rock band Tom Petty and the Heartbreakers. The song was inspired by a brief romantic affair between the song’s co-writer English musician and music producer David A. Stewart of the British music duo Eurythmics and the noted American singer-songwriter Stevie Nicks of Fleetwood Mac fame.

A day after Nicks ended her relationship with guitarist Joe Walsh of the Eagles, she hosted a party at her Los Angeles home. Stewart was one of the guests she invited to the party. According to Stewart, as of that time, he didn’t know who Nicks was but attended the party all the same. And by the end of the party, he and Nicks had had a romantic encounter. Later the following morning, Nicks’ former boyfriend Walsh came to her house. Stewart, who was at that time still inside Nicks’ house, heard her kick him out of the house and tell him to never come to her place again. In an interview with the popular American talk show host Howard Stern on his radio show The Howard Stern Show, Stewart said the song’s title “Don’t Come Around Here No More” were the exact words Nicks told Walsh as she kicked him out of her house. 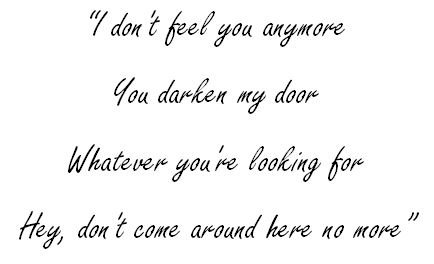 Facts about “Don’t Come Around Here No More”

Tags: David A. StewartDon't Come Around Here No More by Tom Petty and the HeartbreakersStevie NicksTom Petty