Meaning of “Bengali in Platforms” by Morrissey

Bengali in Platforms is a song performed by British singer Morrissey from his debut solo album Viva Hate. The song tells the story of a Bengalis boy who lives in the United Kingdom and tries everything within his power to fit into the British society but fails. In the song, the narrator (Morrissey) advises the young Bengali to “shelve” his “western” ambitions and know that life is difficult “enough when you belong here”. We don’t know whether the Bengalis boy takes the narrator’s (Morrissey’s) advice or keeps on trying to embrace the British culture so he can fit in.

The song, which is one of Morrissey’s most controversial songs, has over the years been condemned by many who find it to be insulting to Asians. However, there are also many others who constantly jump to the singer’s defense saying they simply see nothing wrong with the song’s lyrics.

Our Favorite Line from the Song

Here is our favorite line from the lyrics of Bengali in Platforms: 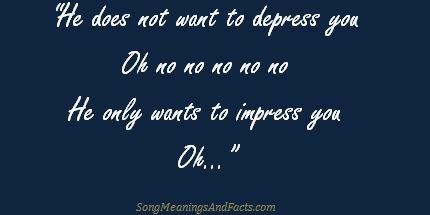 NOTE: For readers who are not aware of who a Bengali (also known as Bengalese) is, a Bengali is one who come comes from Bengal, a geopolitical region located in India and Bangladesh. After the United States, the United Kingdom is the western country with the biggest population of Bengalis. There are almost half a million Bengalis currently living in Morrissey’s native land, the United Kingdom.

Facts about “Bengali in Platforms”