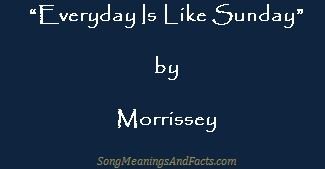 Everyday is like Sunday is a song by English singer and songwriter Morrissey. In the song, Morrissey compares his whole life in a boring coastal town to the dullness and emptiness that Sundays bring him. He describes Sundays with the words “gray” and “silent”. According to him, every single day of his life in that coastal town is boring, “silent” and “gray” just like Sundays are to him. His intense dislike of the boredom with his life in that town becomes so severe that he actually prays for Armageddon or nuclear bomb to come and destroy the entire town and free him from being extremely miserable.

The lyrics of Everyday Is Like Sunday are likely inspired by author Nevil Shute’s 1957 post-apocalyptic novel titled On the Beach. In the novel, Shute writes about a group of people who wait to be annihilated by a deadly nuclear radiation speedily heading towards them.

Favorite Line from the Song

Here is our favorite line from the lyrics of Everyday Is Like Sunday: