“Fast Car” is a song performed by American singer-songwriter Tracy Chapman. Contrary to popular belief, the song isn’t really about cars. The lyrics of the song tell the story of a couple determined to escape the captivities of poverty and make their lives better.

In an interview with Q magazine, Chapman said of the song as one whose theme is about a relationship which fails to work out mainly because it didn’t start from the right place. 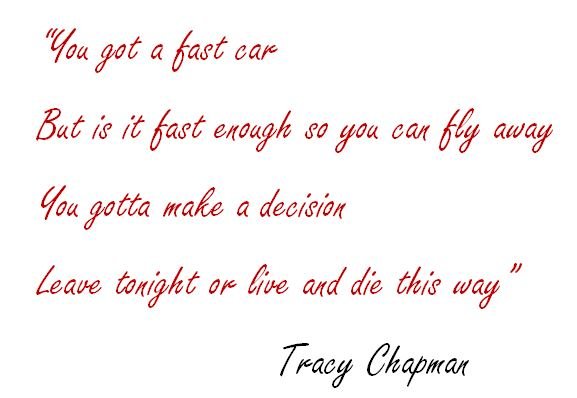 Yes, it did. At the 31st Annual Grammy Awards in 1989, the song was honored with 3 nominations in the following categories:

It won the Grammy Award for the Best Female Pop Vocal Performance. However, it lost both the Song of the Year and the Record of the Year categories to “Don’t Worry, Be Happy” by Bobby McFerrin.

Which artists have covered “Fast Car”?

Over the years, “Fast Car” has been covered by several artists. One of the notable covers includes that of English DJ and record producer Jonas Blue in 2015. The cover features the vocals of British singer Dakota. Blue’s version was so successful that it peaked at No. 2 on the UK Singles Chart.

Below is Jonas Blue’s cover of “Fast Car”: