Meaning of “Andante, Andante” by ABBA

“Andante, Andante” is a 1980s love song recorded and performed by the legendary Swedish group ABBA. Lyrically, this classic tune finds a girl telling her boyfriend to take it easy and gently with her. She tells him, among other things, to tread lightly on her ground and touch her “gently like a summer evening breeze”. She wants him to take his time and do whatever it is he is doing to her in a gentle and soft manner. In the lyrics, it really isn’t made abundantly clear what she means by this. Is she using these words in their literal sense? Or is she using the words as a metaphor for something else?

To a lot of analysts, they believe she’s doing the latter. According to them, the lyrics of “Andante, Andante” are about a young girl who is about to go to bed with her lover for the first time. Since this is her first time, she tells him to be gentle with her.

But is this what the lyrics of this iconic song really mean? When you carefully read between the lines of this classic tune, it makes sense what these analysts are saying.

Who or what is Andante?

Contrary to popular belief, Andante isn’t the name of the girl’s lover. In the world of music, Andante is a piece of music that is sung or played at a tempo or speed that is not too fast and at the same time not too slow. This is exactly how the girl in the song wants to be handled by her lover. 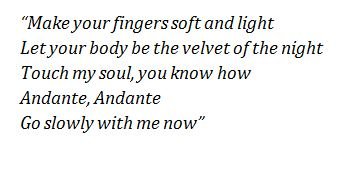 Which album is “Andante, Andante” on?

This tune appears on ABBA’s seventh studio album Super Trouper. It is the fourth track on that album. It is noteworthy that Super Trouper, which was first released in 1980, went on to become the most successful album in the United Kingdom in 1980.

Besides Lily James’ version of “Andante, Andante”, are there any other cover versions?

Yes. The Swedish band Thorleifs released an instrumental version of the song in 1992. ABBA singer Anni-Frid Lyngstad also recorded a Spanish version of this song along with Cuban born jazz trumpeter Arturo Sandoval. The collaboration was released in 2018.