Meaning of “Bohemian Rhapsody” by Queen

“Bohemian Rhapsody” is a song by the iconic British rock band Queen. The song, which is one of Queen’s most well known tunes, has over the years been subject to myriad interpretations. There are speculations that the song is about the childhood of Freddie Mercury (Queen’s frontman). Mercury was born in Zanzibar (which is now a part of Tanzania). He spent his young life in both Zanzibar and India , within a family that practiced Zoroastrianism. Therefore it makes sense to hear certain religious words like “Bismillah” and “Beelzebub” in the song. A far more likely meaning of the song is Mercury’s sexuality — specifically, him saying that he’s gay.

According to English author and journalist Lesley-Ann Jones, who authored the 1997 biography about Mercury titled Freddie Mercury: The Definitive Biography, she strongly believes Mercury was trying to use the song to tell the world that he was gay. Why is Jones saying so? According to her, during a 1986 interview she had with Mercury, she asked him if the song was his way of coming out as gay but he never answered straightly. On top of that she said he never gave her a clear meaning of the song. Jones said the only thing Mercury told her with regard to the meaning of the song was that its lyrics were “about relationships”. According to Jones, after the death of Mercury from complications brought on by AIDS, she interviewed his lover hairdresser Jim Hutton on multiple occasions and he told her that the lyrics of “Bohemian Rhapsody” was basically Mercury stating that he was gay.

Following Mercury’s death in 1991, English author and lyricist Tim Rice said he also believes some of the song’s lyrics were about Mercury confessing to his fans he was gay. According to him, the lines : “Mama, I just killed a man”, “Put a gun against his head, pulled my trigger, now he’s dead”, and “I see a little silhouette of a man” were the Mercury’s own way of saying that he’s neutralized his straight self and is being disturbed by his actions.

It is worth noting that the other members of Queen have denied the speculations above. According to them, the lyrics of the song aren’t about Mercury coming out. 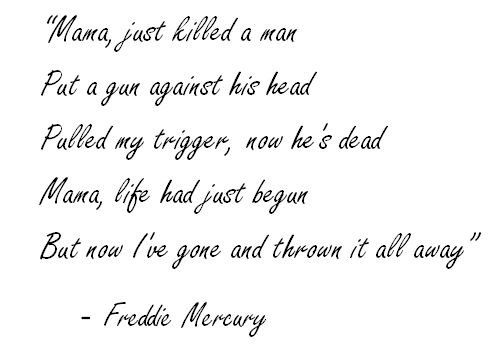 But are the interpretations above really what the song is about? The song’s writer Mercury went to his grave never saying exactly what the lyrics of “Bohemian Rhapsody” means. His bandmates Roger Taylor, Brian May and John Deacon have also never disclosed to the general public the song’s real meaning. In an interview, May alluded to the meaning of the song being very personal. According to him, he and the rest of his colleagues all vowed to never ever reveal its real meaning to the world mainly out of respect to their late friend and bandmate Mercury.

Mercury took the real meaning of “Bohemian Rhapsody” to his grave

While he was alive, Mercury was (on a number of occasions) asked the meaning of the song, but he never disclosed it. Even when asked by English DJ Kenny Everett who was a close friend of his, Mercury just said the song’s lyrics were nothing special and that they were just “random rhyming nonsense”.

On another occasion, Mercury said “Bohemian Rhapsody” was one of those songs that have a “fantasy feel about” them. He went on to say that we should all just listen to the song and then make up “our own minds” as to what the lyrics say to us.

So the lyrics of this masterpiece of a song could be any of the above interpretations or none of them. Or just like Mercury himself said maybe it is just a bunch of rhyming words which don’t make sense.

On the occasion of the 40th anniversary of the birth of “Bohemian Rhapsody” in 2015, May told the BBC that he believed while Freddie was alive, he enjoyed knowing that the lyrics of the song had many different interpretations. According to May, “Bohemian Rhapsody” is an “outlandish song” that is “beyond analysis”. He went on to say that as for him, he has his own personal feelings and ideas about the meaning of the song. However, he hated talking about them.

Lyrics of “Bohemian Rhapsody” are self-explanatory with some nonsense

In an interview with BBC Three, Queen’s drummer Roger Taylor said of the song’s meaning as one that is “fairly self-explanatory” and which contains “a bit of nonsense in the middle”.

Key Words and Phrases in the lyrics of “Bohemian Rhapsody”

Below are some of the key words and phrases we find particularly relevant in terms of increasing one’s understanding of the lyrics of this masterpiece:

Below is the official music video of “Bohemian Rhapsody”: