Meaning of “Doo Wop (That Thing)” by Lauryn Hill

“Doo Wop (That Thing)” is a song by American singer-songwriter Lauryn Hill of The Fuges fame. Hill uses the lyrics of the song to warn her fellow African-Americans who find themselves caught up in the struggles. In the song, the singer sends a stark warning to African American men who pay more attention to material things than their women and African American women who put all their efforts in trying to transform themselves in hard rocks when in actual fact they are precious gems.

She concludes by advising them not to allow “that thing” to lead to the destruction of their lives. Many have praised the lyrics of the song (most especially its chorus) for doing a great job in promoting equality between men and women. 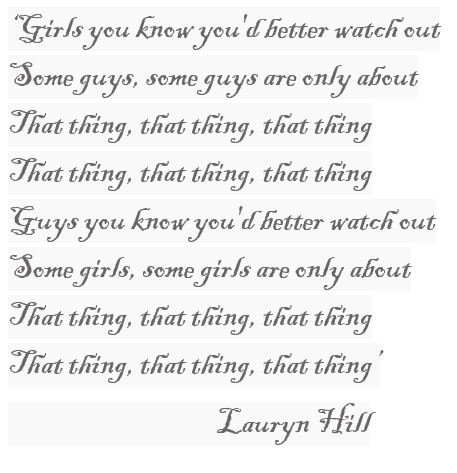 Facts about “Doo Wop (That Thing)”

Did “Doo Wop (That Thing)” win a Grammy Award?

Yes, it did. The song actually won two awards at the 1999 Grammy Awards. The awards are as follows: Best Female R&B Vocal Performance and Best R&B Song.

Which artists have covered “Doo Wop”?

Several famous artists ranging from Rihanna to Ester Dean to Teyana Taylor have covered this song since it came out in 1998. Drake sampled this song in his 2014 track “Draft Day”.

What is the meaning of Doo Wop? Is it an English phrase?

Doo-wop is an actual word in the English language. It is a noun that refers to a type of popular music that began in the 1950s in the United States. It is considered a genre of R&B.

What genre of music is this song?

It belongs to the following genres: doo-wop, R&B and hip hop.