“Gimme! Gimme! Gimme! (A Man After Midnight)” is a song performed by the famous Swedish pop group ABBA. In the song, the narrator (Agnetha Fältskog) talks about the life of a young woman who lives a very lonely life. The woman, who dislikes her loneliness, spends her life longing for a companion to make her life more meaningful and pleasant. She even goes on to compare her life to the seemingly happy lives of movie stars and laments at the sharp contrast between hers and theirs.

Simply put, the song is about a lonely woman who not only dreads her loneliness but also longs for love. 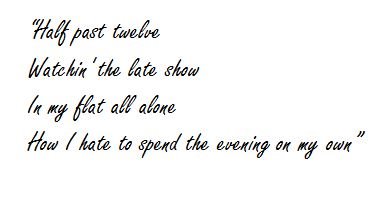 It is a disco song.

American singer and songwriter Madonna heavily sampled this song on her 2005 hit single “Hung Up”. Madonna reportedly personally wrote to the writers of the song (Andersson and Ulvaeus) for permission to use the song. Lyrically, Madonna’s “Hung Up” has a theme very similar to ABBA’s Gimme! Gimme! Gimme!

For your information, numerous artists often contact ABBA to sample their songs, however, ABBA often doesn’t grant permission. But according to Andersson, when Madonna approached them to sample the song, they said “yes” because they admired her. Speaking with the BBC, Madonna said Andersson and Ulvaeus only allowed her to use the song only after she agreed to give them a significant percentage of the revenue the song made from airplays and sales.