“Haitian Divorce” is a song performed by the American rock band Steely Dan. The lyrics of the song tell the story of a married woman who travels all by herself to Haiti  in order to get a quick divorce from her husband. While in Haiti, she has a very brief romantic affair with a Haitian man and somehow ends up being unable to get the divorce that took her to the Caribbean country in the first place. She returns home to America only to find out that she’s pregnant. Nine months later she gives birth to a half Haitian baby.

The lyrics of “Haitian Divorce” are inspired by how 1970s Haiti used to be a hot spot for Americans looking for a quick and easy divorce. In the early 1970s, the Haitian government made it ridiculously easy for foreigners (especially Americans) to come into their country and get divorced from their spouses. The laws in Haiti made the divorce process so easy for foreign nationals by getting rid of a number of red tapes, including lengthy waiting periods and residency requirements.  In addition to that, both partners were not required to be present at the hearing on their divorce. All in all, a foreigner could enter into Haiti and obtain a divorce in just a matter of hours!

It’s noteworthy that in addition to giving foreign nationals the opportunity of obtaining a quick and painless divorce, Haiti also gave couples the option of a very quick marriage devoid of so many red tapes. So generally speaking, a married foreigner could just travel to Haiti with his/her wife/husband-to-be, get a divorce and get married to his/her new flame within a matter of days.

The authorities of Haiti used their quickie divorce and marriage for foreigners as a clever strategy to attract more tourists into the country. 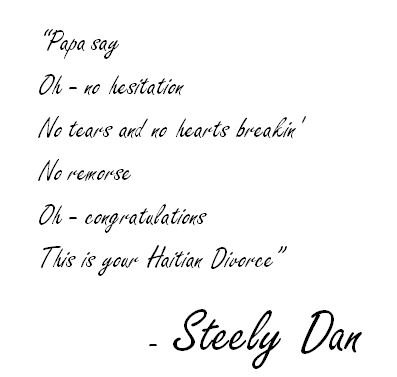 To date, neither the original version nor any other version of “Haitian Divorce” has won a Grammy.

In the lyrics of the song, it appears the woman’s father was the one who advised her to go to Haiti for the quick divorce. Is this the case?

The line “Papa say” from the song is primarily what makes many to believe that the woman’s Dad was the one who encouraged her to go to the Caribbean nation for the divorce. But the interesting thing is that the “Papa” could possibly refer to the former totalitarian President of Haiti François Duvalier (also known by the nickname Papa Doc). Papa Doc ruled Haiti from 1957 until his death in 1971. During his tenure as President, he often tried promoting Haiti as one of the world’s top divorce-jackpot destinations in order to boost tourism.