Meaning of “Radio Gaga” by Queen

“Radio Gaga” is one of the biggest hits from the British rock band Queen. The lyrics of “Radio Gaga” see the singer expressing his displeasure of how television is taking over radio in terms of popularity. He dislikes how more and more people are abandoning radio and depending on television for music and entertainment in general. The narrator doesn’t want radio to die because he loves it. Hence the word “gaga”. If you’re gaga about something, you’re crazy about the thing. So here the narrator is telling the world how crazily in love he is with radio. He even talks about how radio educated him and kept him company during his lonely nights. 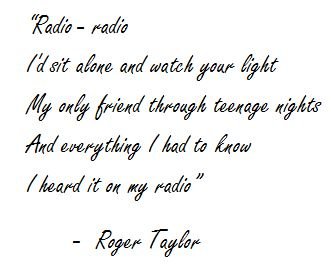 According to Queen drummer Roger Taylor (who penned this song), he got his inspiration for the track from his young son and while watching MTV.

The song was originally not written to adore radio. The song was initially titled “Radio Caca” and condemned what radio was becoming. Taylor, who apparently disliked the manner in which radio stations were rapidly becoming commercialized, penned the lyrics of “Radio Caca” to heavily criticize the developing trend. However, the other members of Queen didn’t like the song’s theme and asked him to rewrite it. Taylor rewrote the lyrics and changed the song’s title to “Radio Gaga”. So basically the lyrics of the track went from severely criticizing and condemning the commercialization of radio to the adoration of radio.

What’s the meaning of “Radio Ca-ca”?

Taylor said he got the phrase from his son Felix Luther, who was only roughly 3 years old then. The 3-year-old Felix wanted to express how bad he felt radio was and ended up with the phrase “radio caca”.

Below is the official music video of this masterpiece:

Was this song inspired by “The War of the Worlds” from the radio drama “The Mercury Theatre on the Air”?

The song isn’t really inspired by the renowned American drama series series The Mercury Theatre on the Air. However, the line “Through wars of worlds – invaded by Mars” is in reference to the episode “The War of the Worlds” from the series in question.

Which artists have covered “Radio Gaga”?

Since the late 1980s till date, the song has been covered by several artists, including Sophie Ellis-Bextor, Elaine Paige and Electric Six.

What are some of the notable live performances of this song?

One of the most notable live performances of this song took place on July 13th, 1985 at iconic charity concert Live Aid in Wembley Stadium. During the performance, Mercury was able to make over 70,000 members of the audience clap and sing in unison to the song’s chorus.

Another famous live performance of this track took place on April 20th, 1992 at the Freddie Mercury Tribute Concert. Singer Paul Young and Queen performed this song at that event.

On June 3rd, 2002, the remaining members of Queen performed this tune with Phil Collins at the Buckingham Palace (Party at the Palace) commemorating the Golden Jubilee of Queen Elizabeth II. During the performance, Collins played the drums in place of Taylor while Taylor sang lead vocals.

No. Despite being hugely popular around the globe, this track never won Queen a Grammy Award.