Meaning of “Smithereens” by Twenty One Pilots

“Smithereens” is a song recorded and performed by Twenty One Pilots. Twenty One Pilots is a musical duo from Columbus, Ohio, United States. The lyrics of “Smithereens” are basically an ode to a woman named Jenna Joseph. Jenna is the wife of the duo’s lead vocalist Tyler Joseph. In the song, Tyler expresses his deep love for Jenna. He tells her he would do anything for her. For her, he would enter into a fight with a more powerful opponent and “get beat to smithereens“.

Tyler Joseph and Jenna got engaged in July 2014. The couple eventually tied the knot a year later in March 2015. 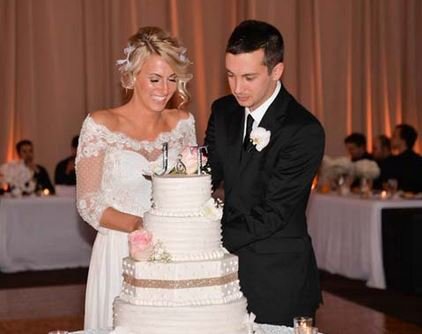 The picture above shows Twenty One Pilots’ Tyler Joseph and Jenna Joseph on their wedding day.

Was “Smithereens” released as a single from Trench?

No. Trench produced the following singles: “Jumpsuit“, “Levitate”, “Nico and the Niners” and “My Blood”.

Where can I find the music video of “Smithereens”?

The song wasn’t released with a music video.

Are samples incorporated into this tune? If yes, what are these samples?

Tyler and Meany co-wrote and co-produced this track from scratch without using any sample. Simply put, it’s sample-free.