Meaning of “The Ringer” by Eminem

“The Ringer” is the title of the first track from American rapper Eminem‘s 13-track studio album titled Kamikaze. The lyrics of this fiery track begin with an apparently furious Eminem saying he is just going to write down the first thoughts that come to his mind and see where these thoughts take him. The lyrics of this track see Eminem mainly addressing his fans and critics alike. Below are some of the key issues Eminem raps about in this track:

In the song, Eminem strongly criticizes the current state of the hip-hop industry. In doing so, his primary focus falls on mumble rap (also sometimes referred to as SoundCloud rap). He even goes as far as mentioning some of the big names in the mumble rap world and actually dissing them.

Among the numerous rappers Eminem takes jabs at in the lyrics of this song include the following: Lil Yachty, Lil Xan and Lil Pump. According to Eminem, the latter two rappers blatantly copy rapper Lil Wayne.

In addition to using this track to take jabs at other rappers, Eminem also devotes a portion of the lyrics to praise some of his peers. Rappers Big Sean, Kendrick Lamar, Joyner Lucas and J. Cole are the rappers Eminem heaps praises on.

Eminem attacks Donald Trump on this track. In the lines below, Eminem not only mocks President Trump by calling him “Agent Orange”, but also goes on to claim that the “nervous” president sent his Secret Service to investigate him. 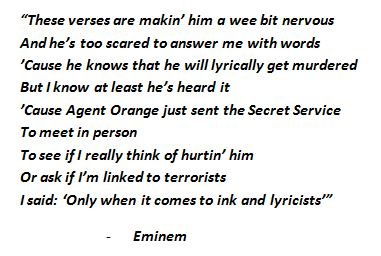 If it is in fact true that the Secret Service questioned him about possibly threatening President Trump, this wouldn’t be the first time this has happened to Eminem. The Secret Service also came after Eminem in 2003 for his song “We As Americans”.

Blasts the Public for treating him unfairly

In the following lines, Eminem strongly blasts the public for being unfair in their treatment of him. According to him, when his critics say negative things about him, they are rewarded. However, when he does the same to them, he is criticized.

At the 2017 BET Awards while performing his anti-Donald Trump song “The Storm”, Eminem told all his fans who support Trump to stop listening to his music. However, Eminem now seems to have regretted saying that. So he devoted a significant percentage of the lyrics of “The Ringer” to address that issue. In the lines below (from the track), Eminem talks about wishing he could turn back the hands of the clock so he could reword what he said in “The Storm“. In our eyes, this is nothing short of a sign of regret. Eminem goes on to tell those Trump-supporting fans of his that he empathizes with them as well as other Trump supporters.

The “evil serpent” in the lyrics above refers to President Donald Trump.

According to Eminem, Trump not only deceived his followers but ended up deserting them. Owing to this, Eminem claims he understands them even though they support Trump.

Facts about “The Ringer”