Meaning of “Birds” by Imagine Dragons

“Birds” is a very touching song written and performed by the American rock band Imagine Dragons. On “Birds”, the narrator sings emotionally about a very special bond he shared with a very special person. From the lyrics, it’s abundantly clear that the relationship is no more. However, the narrator doesn’t  state clearly what led to the demise of that bond.

Is this song about the death of the narrator’s lover?

Some have suggested that the death of the narrator’s lover is what led to the end of the relationship. However, this isn’t clearly stated in the lyrics. Death is indeed mentioned in the song. In the section where it is mentioned (which is in the pre-chorus of the song), the singer mainly talks about nothing in life lasting forever. He indeed mentions death. However, he compares the impact it has on us to the impact life has on us. Life makes us grow whereas death makes us hard. 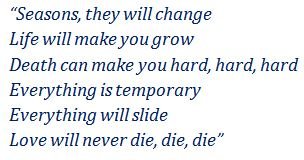 He spends the rest of the song lamenting about the special bond between his beloved one and him. Among other things, he talks about how he often spends his nights missing his beloved and wishing they were still together

After all is said and done, the narrator comes to the conclusion that nothing in this world lasts forever. And their beautiful relationship was no exception to that. However, he believes that even though they have been separated, the love they share will never die. He expresses the hope of someday seeing that special person again.

What we suspect the song is about

We strongly suspect that the lyrics are about Dan Reynolds’ marital problems. Why do we say so? The song was written roughly around the time Reynolds and his wife Aja Volkman were about divorcing after 7 years of being married. Reynolds’ relationship with Volkman informed a number of Imagine Dragons’ songs. We strongly believe this song is one of the songs whose lyrics stem from Reynolds’ separation from Volkman.

That said, it is worth mentioning that as of the date of the publishing of this post,  none of the writers of “Birds” has confirmed the lyrics stem from Reynolds’ marital woes.

Was “Birds” released as a single?