Meaning of “Natural” by Imagine Dragons

“Natural” is a song performed by the American pop rock band Imagine Dragons. The song sees the band’s frontman Dan Reynolds singing about being cold hearted in this cold world in order to survive the adversities that one encounters.

During a press release, Reynolds shed more light on the actual meaning of the song’s lyrics. According to him, they are about finding yourself in a “dog-eat-dog world” and “being willing and able to stand up to whatever adversity comes your way”.

All in all, this fantastic tune centers on overcoming the obstacles that life may place in your way. The lyrics are very positive because they have the ability to empower the listener. 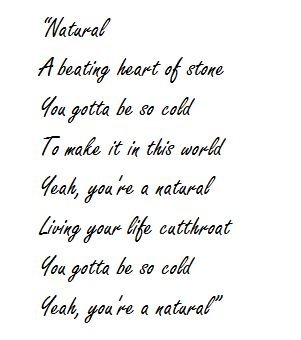 Below is the official music video for “Natural”. The video came out on 24th August, 2018.

Is “Natural” inspired by Dan Reynolds divorce from his wife Aja Volkman?

We are not sure about that. That said, it is noteworthy that many fans believe that the song is inspired by the demise of Reynolds’ marriage to singer Aja Volkman. However, we have no evidence to support that even though part of us also tells us that part of the song might be inspired by his marital woes. What we are absolutely certain of is that the song came out a few months after Reynolds announced that he and Volkman were getting a divorce. The marriage began in 2011 and produced three daughters before ending in 2018.

What music genre is “Natural”?

This is purely an alternative rock song.