Meaning of “Sussudio” by Phil Collins

“Sussudio” is a song performed by renowned British singer, songwriter and drummer Phil Collins. The song was the first single released from his 1985 multiple Grammy Award winning third studio album No Jacket Required.  According to Collins, the lyrics of this tune are basically telling the story of a schoolboy who falls madly in love with a girl at his school but is unable to approach and talk to her.

The song led to the birth of the slang term of the same name “Sussudio”, which refers to a girl whom a guy has a crush on but can’t seem to talk to her.

Where did Collins get the word “Sussudio” from?

When asked what the meaning of the word “Sussudio” was and if it meant anything to him, Collins said it was a meaningless word. According to him, he just made it up during the writing process of the song. He said the word just popped out of his mouth while playing with his drum machine. He further stated that the word perfectly matched the song, but he knew since it meant nothing, he had to find another word to replace it. But try as he could, he was unable to find any other suitable word to replace “Sussudio”. He therefore retained it.

Misconceptions about the source of “Sussudio”

Since this track was released in 1985, there have been quite a number of misconceptions and stories regarding how Phil Collins came about with the name “Sussudio”.  Two of the most popular of these stories are as follows:

But like we have seen from the explanation above, all these stories are false. 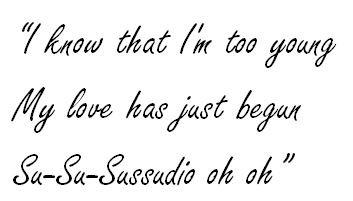