Meaning of “Sit Next to Me” by Foster the People

“Sit Next to Me” is a song by the indie pop band from Los Angeles, California called Foster the People. The lyrics of this track see the band’s lead singer Mark Foster reaching out to a girl (apparently a former lover) and trying to ensure that they remain friends despite the fact that their romantic relationship has come to an end.

But are the lyrics of “Sit Next to Me” based on a real event in Mark Foster’s life?

Speaking with Rolling Stone magazine, Foster said during the recording process in Los Angeles, he spent a great deal of his time in bars until he began getting tired of the cosmetic nature of the scene. According to him, everyone he met at these bars tried to “look cool, say the right thing and be at the center of the universe”. He said the whole scene felt more “like a fashion show” to him to the point where he felt alone despite the fact that he was in a room full of people. He told Rolling Stone that during such times, all his heart desired was for someone real to come into the bar and sit next to him. It is this desire of someone real sitting next to him that inspired the song’s title – “Sit Next to Me”. 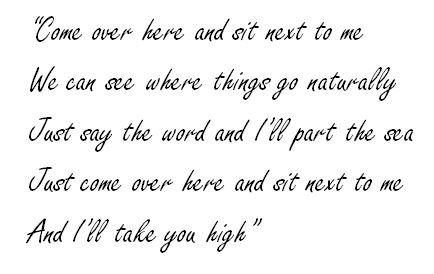 Facts about “Sit Next to Me”

What musical genre is “Sit Next to Me”?

This track can be put in the same category as indie pop, funk and neo-psychedelia.

Does this track make use of samples?