“Wake Me Up” by Avicii

“Wake Me Up” is a song by the late Swedish superstar DJ Avicii. According to the song’s vocalist and one of its writers American musician Aloe Blacc, the song was inspired by true events in his life.

Speaking with Today, Blacc said a few years before penning the hit song, while on a tour in Europe, he suddenly came to the realization that the life he was living was too good for him to believe.

According to Blacc, while on the road, he kept thinking to himself that the incredible heights he had reached in life was “such a dream” and that someone should wake him up “when it’s all over”. He said the sudden realization of his unbelievably good life gave birth to the lyrics of “Wake Me Up”. 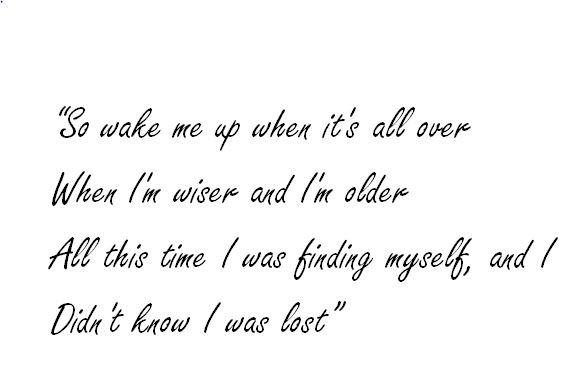 Did Avicii write “Wake Me Up”?

“Wake Me Up” was written by Avicii, Aloe Blacc and American guitarist Mike Einziger of Incubus fame. Einziger played the famous acoustic guitar on the track.

The three musicians wrote the song in about two hours at Einziger’s home. Speaking to The Huffington Post, Blacc said the original completed version of the song was the acoustic one. According to him, it was Avicii who remixed the song into the famous dance/electronic song that it is currently known the world over.

The song was produced by Avicii and Iranian-Swedish music producer Arash Pournouri. It is worth noting that Pournouri once served as the manager for Avicii.

Avicii introduced the song to the general public for the first time in March 2013 during his set at the Ultra Music Festival held in Miami. He performed it along with a live band which included Blacc and members of the rock band Incubus.

“Wake Me Up” was officially released on June 17th, 2013. It was the first single from Avicii’s critically acclaimed debut studio album titled True.

The song was so successful that it reached the number one position in over 20 countries across the globe, including Avicii’s home country Sweden and the following:

On the US Billboard Hot 100, the song peaked at number 4.

“Wake Me Up” made history by becoming the first song on Spotify to accumulate 200 million streams.

Having been viewed over 2 billion times, the music video for “Wake Me Up” is one of the most viewed videos on YouTube.

The song made history in the United States by becoming the first electronic/dance song to ever sell over 4 million units in that country.

Having sold several millions of copies all over the world, “Wake Me Up” is one of the most commercially successful singles of all time.

On September 30th, 2013, Blacc also released his version of the song (the original acoustic version).

Since its official release in June 2013, the song has been covered multiple times by various artists, including the Red Hot Chilli Pipers and Tebey.

Did “Wake Me Up” win a Grammy Award?

No. It is noteworthy that although Avicii was nominated for multiple Grammy Awards during his lifetime, he never won one.

What are some of the awards that “Wake Me Up” has received over the years?

Despite not winning a Grammy, the song has won a number of prestigious awards, including a Billboard Music Award and a Teen Choice Award in 2014.

What genre does “Wake Me Up” belong to?

Owing to the nature of the song, it can be classified under two major genres: foltronica and EDM.

Who is the girl in the “Wake Me Up” music video?

The music video actually stars two girls. The older one is a model from Russia named Kristina Romanova whereas the younger one is an American model called Laneya Grace.

On 13th September 2013, the album “True” by the late Tim Bergling (stage name Avicii) was released. It came out through the labels PRMD and Island.

The album has a total length of forty-six minutes, fifty-six seconds. Five singles were released from it. They are:

Avicii, born Tim Bergling was a renowned Swedish musician, DJ, remix artist, and record producer. Born and raised in Stockholm in 1989, he was among the most popular electronic DJs of the world in his time. He topped charts and toured many countries with his music.

He began his music career at a very young age. At eight, he already started making remixes of classic old songs in his bedroom. He posted several of his remixes on electronic music platforms and this impressed many record labels. He signed his first record deal with Dejfitts Plays label, at age 16.

Avicii released his maiden studio album, True, in 2013. The album earned him a lot of recognition by reaching the top 10 of the international charts and ranking number one in several countries. Wake Me Up, which is the lead single on the album, topped the music charts of over 30 countries. It reached number 4 on the Billboard Hot 100 charts and has received a six-time platinum certification from the RIAA.

He released his second studio album, Stories, in 2017. He was a two-time Grammy Award nominee and had won several awards, including the American Music Awards.

Sadly, he died on 20 April 2018, at age 28. His cause of death was suicide. Avicii committed by self-inflicted injuries using a broken glass bottle.