Meaning of “Wonderful Life” by Bring Me the Horizon

“Wonderful Life” is a song recorded and performed by the English rock band Bring Me the Horizon (BMTH). The lyrics of “Wonderful Life” find the band’s lead vocalist Oliver Sykes battling with the troubles of life, most notable loneliness.

He sings about how things such as stress and loneliness are consuming him and how nobody cares whether he’s dead or alive. Having looked critically at all the sadness and boredom present around him, he comes to the conclusion that life is wonderful.  Of course he says this with a heavy dose of irony! How can a mundane and lonely life that constantly sees you on the edge of a knife be wonderful?! 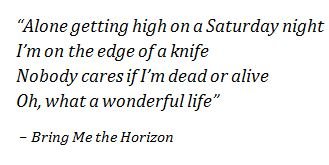 Are the lyrics of “Wonderful Life” autobiographical?

To a certain degree, they are. Speaking to BBC Radio 1 in relation to the song, Oliver Sykes shed some light on it. Here are the things he said regarding the song’s lyrics:

Here is the official lyric video of the song released on the band’s YouTube Channel on October 21st, 2018:

Who sings the backing vocals on this tune?

Apart from on this track, has Dani Filth ever worked with Bring Me the Horizon?

No. This track is the first time he’s working with BMTH.