“Conversations with my Wife” by Jon Bellion

Throughout the song, he lets her know how much she means to me. He cares more about her and being with her than all his achievements and awards. In the pre-chorus, he even goes as far as telling her that she’s the only thing he’s done right his entire life.

In the chorus, he talks of not wanting to be “some digital Jesus”. He doesn’t want followers. All he wants to do is get lost with her.

From the lines above, Bellion is basically asking his wife whether she’d still love him when his popularity on social media. Would she still love him if fame in the music industry were to end today? He asks these because he wants their love to last even in the absence of these things. She apparently means so much more to Bellion than all these things. In the song’s bridge, he even mentions being so “ready to run from the spotlight“.

Is “Conversations with my Wife” autobiographical? Is Jon Bellion even married?

The moment Bellion dropped this track in October 2018, many of his fans became very puzzled. Why? Because as of that time, no one was exactly sure of his relationship status.

However, it was later revealed by a Twitter user that Bellion got married in early parts of 2018. Bellion himself posted a tweet in relation to his marriage. In the tweet (which has since been deleted), he alluded to being married. Below are the tweets between Bellion and a Twitter user regarding his relationship: 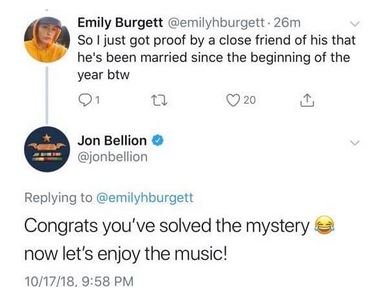 Quick Facts about “Conversations with my Wife”