“Fall in Line” is a song performed by American singer and songwriter Christina Aguilera. The song also features the guest vocals of fellow American singer Demi Lovato. The lyrics of “Fall in Line” focus mainly on female empowerment. In the song, the singers (Aguilera and Lovato) talk about the challenges women of today face. The lyrics go on to encourage women never to back down or “fall in line” in spite of the adversities that come their way.

According to Aguilera, she wrote the song a number of years before these women empowerment movements sprang up. She said she wrote the song because its message was something she felt the world needed to hear. According to the singer, from a very young age, she always wanted to champion the cause of women’s rights and anyone struggling to ensure that they “have their own voice”.

Taking to the social media platform Twitter, Aguilera said “Fall in Line” has the sole aim of liberating the voice of bold thinkers, truth seekers, and anyone who has ever been in the situation where they felt “silenced and repressed”. The song encourages the aforementioned categories of people to never ever “back down” or “fall in line” regardless of the challenges they might encounter.

In another post on her official Twitter account, Aguilera told her fans the song was also about “self empowerment” and “supporting each other” to gain freedom. 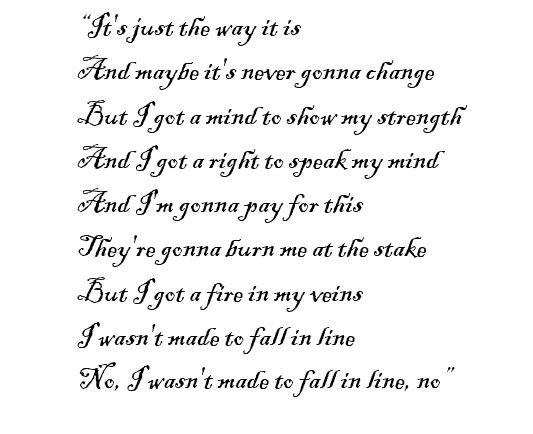 Facts about “Fall in Line”

Why Christina Aguilera worked with Demi Lovato on “Fall in Line”

According to Aguilera, the main reason why she chose to feature Lovato on the track was because she needed another “powerhouse singer” who had the ability to take the song to the next level with her powerful vocals. Aguilera said when she first heard Lovato’s vocals on the song, tears filled her eyes. It is worth noting that many have hailed this collaboration as one of the most powerful collaborations of 2018.

What is the meaning of the music video of “Fall In Line”?

The music video begins with the kidnapping of two young girls by a number of masked men. The two young girls are young Aguilera and Lovato. The video later shows the girls as adults being held captive in a male-dominated prison where they are made to sing. The two women, who work together, brave all odds and eventually fight their way out of the prison facility to gain their freedom. The prison facility in the music video of the song symbolizes the imprisonment many women “have felt” and the freedom they can achieve when they work together. Aguilera herself confirmed the above on Twitter to be the meaning of the song’s video.