Meaning of “Come Out and Play” by Billie Eilish

“Come Out and Play” is the title of a single by singer Billie Eilish that was released in November 2018. The theme of self-belief/self-confidence takes center stage in the song’s lyrics.

Throughout the song, Billie encourages someone she’s addressing to show the world the amazing stuff they are made of. She encourages the person not to hide their remarkableness. She tells them to come out and play, for the world needs to see the awesomeness that lies in them. 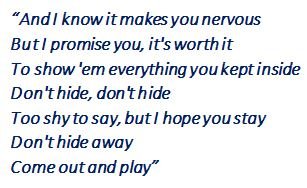 The song was written for the Apple commercial titled “Holiday – Share Your Gifts”. This commercial is Apple’s official holiday commercial for the year 2018.

According to the song’s co-writer Finneas, he and Billie were contacted by Apple to write a song for this commercial. At that time, the commercial was at its early stages. However, he and Billie were allowed to watch it so they could write a suiting song for it. The pair penned the song while watching the advert, which is very inspirational. For your information, Finneas is Billie’s older brother.

The advertisement tells the story of a very talented young woman. Despite the extraordinary creativity she possesses, she’s scared to share her talents with the world.

According to Apple, the clip above is for all who have created something amazing but are afraid to share their creation with the world.

Facts about “Come Out and Play”

On which album of Billie Eilish’s can “come out and play” be found?

The song would likely appear on Billie’s debut solo studio album. That album is set for release in 2019. As of this moment, the album’s title hasn’t been disclosed to the public.

Where did Eilish premiere the song? And is there a life performance of this track?

The song was premiered on Zane Lowe’s Beats 1 show. Regarding the live performance, Billie performed this track live during the launching of the Apple’s 2018 holiday campaign. The event took place at a Santa Monica Apple store on the same day the song was released. You can watch that performance below.