FYI: Cole revealed in January 2016 that he and a woman named Melissa Heholt had gotten married. However, he didn’t mention when the marriage took place. 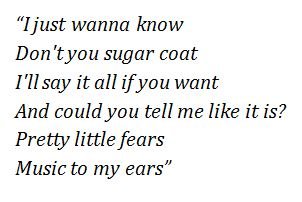 The chorus of “Pretty Little Fears”.

Is this the first time that 6LACK and J. Cole have worked together?

Is there are an official music video for “Pretty Little Fears”?

Yes, there is. You can watch it here:

Which album can this track be found on?

“Pretty Little Fears” can be found on 6LACK’s album East Atlanta Love Letter. The album is the second studio album by 6LACK. It was released on 14th September, 2018.

Was this track released as a single?

Yes. It was released as a promotional single a few hours before the album on which it appears was released.