“It Ain’t Me” by Kygo and Selena Gomez 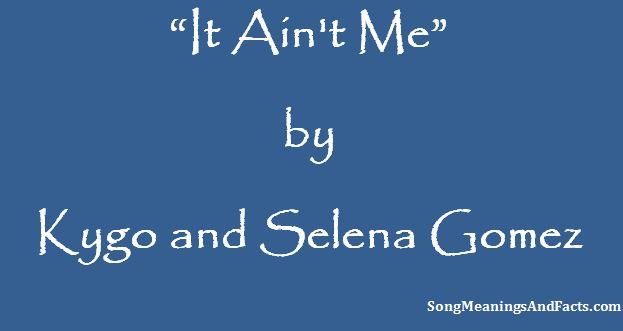 It Ain’t Me is a song performed by singer Selena Gomez and DJ Kygo. According to Ali Tamposi, who co-wrote It Ain’t Me, the song thrives on the theme of standing firm in a harmful relationship. In the song, Selena sings about the negative habits of her former lover that harmed the relationship and led to its demise. Her lover’s excessive drinking and partying got her so frustrated she was forced to end her relationship. So basically, the song is about a nostalgic look at a relationship that came to an end as a result of too much partying and abuse of alcohol.  Speaking about the song, Tamposi said that it is about a woman having the ability to get out of a toxic relationship amidst society’s pressure that she stay with her lover.

Facts about It Ain’t Me by Kygo and Selena Gomez

Our favorite line from the lyrics of It Ain’t Me

There are many awesome lines in the song, but here is our favorite:

Tags: It Ain't Me by Kygo and Selena GomezMeaning of the Song It Ain't Me