Meaning of “No Tears Left To Cry” by Ariana Grande

“No Tears Left To Cry” is a song performed by singer and songwriter Ariana Grande. Although the lyrics of the song don’t directly mention the 2017 Manchester Arena attack, they strongly allude to it and go on to let the world know she’s got no more tears to cry and will not allow that terrible incident keep breaking her. Simply put, she’s recovered emotionally from the incident, has cried all the tears in her and is now ready to live again and focus on her career.

The 2017 Manchester Arena bombing was a terrorist attack carried out by an Islamist terrorist after Ariana Grande had performed live at a concert at the Manchester Arena on May 22nd in Manchester, United Kingdom. The heinous attack left as many as 23 people dead (including the attacker Salman Ramadan Abedi) and injured more than 500 people.

In response to the bombing, two weeks later (On June 4th, 2017), Grande organized a televised benefit concert for the victims and family members of the bombing dubbed One Love Manchester. Guest stars at the concert included Miley Cyrus, Katy Perry, Liam Gallagher, Justin Bieber, Coldplay, Pharrell Williams, the Black Eyed Peas, Little Mix, Take That, Niall Horan, Imogen Heap and Marcus Mumford. The benefit concert eventually helped to raise about $23 million to help the victims of the bombing and their families. 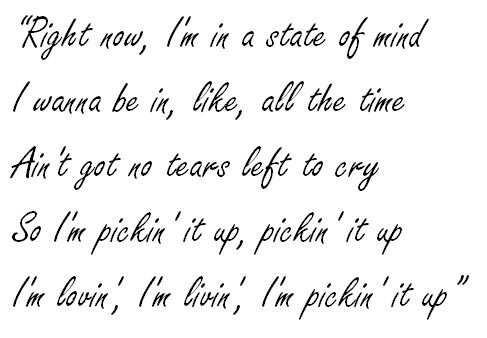 Facts about “No Tears Left To Cry” by Ariana Grande

Below is the official music video of the song: