Meaning of “Sad” by XXXTentacion

“Sad” is a song by the late American hip hop artist XXXTentacion. The lyrics of “Sad” see the singer struggling with severe depression, which is brought on by issues in his romantic relationship. The singer, who fears that his relationship with his girlfriend might come to an end, goes as far as telling her that he would take his own life should she ever leave him.

It is noteworthy that this isn’t the first song of the singer/rapper to deal with the issue of suicide. His 2017 song “Jocelyn Flores“, which is dedicated to a female model friend of his who committed suicide, also deals with this topic. 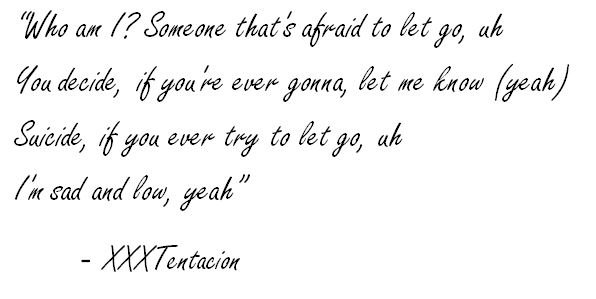 But are the lyrics of this song autobiographical?

While many suspect the depressing lyrics are autobiographical, the rapper never confirmed or denied that during his lifetime. Based on this, we cannot safely conclude whether the lyrics are about something real in his life or not. But what is 100% certain is that throughout his short life, XXXTentacion battled severely with mental health issues. And studies have shown that most people who have suicidal thoughts tend to suffer from a variety of mental illnesses ranging from depression to schizophrenia.

For example, in a 2017 interview he had with presenter K. Foxx on 103.5 The Beat in Miami, he confessed to have attempted committing suicide but was too afraid to do it.

Below is the posthumous music video of “Sad” released a day after a public memorial service was held in Florida for XXXTentacion: